Let Me Hear It Barefoot

Naomi works for his father’s waste collection company. He spends his days wishing that someday he could leave his parents’ home. Oneday, Naomi meets Maki, a young man who lives with his blind mother-in-law, Midori. She always tells Maki about her travels in the world, but the truth is that she has never been abroad. When she gets seriously ill, Midori entrusts her dream of traveling the world to Maki. However, Maki is unable to travel abroad due to lack of funds, so he decides to create the “sounds” of places around the world with Naomi and send the recorded tapes to Midori. 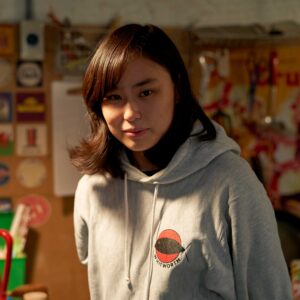 Born in Fukuoka in 1995. Her first feature film, "Orphan's Blues" (18), a graduation projectfrom Kyoto University of Art's Department of Film and New Media, won the Grand Prix atthe 40th Pia Film Festival's "PFF Award competition2018". In addition, the film won theGolden KOJIKA Award and the Audience Award at the NARA-wave, the student section ofthe Nara International Film Festival.She won the rights to the PFF Scholarship to make "Let Me Hear It Barefoot," which was hercommercial film debut. The film was selected for the 51st Rotterdam International FilmFestival's Harbor section, Frameline46, the San Francisco International LGBTQ+ FilmFestival, and other festivals overseas.